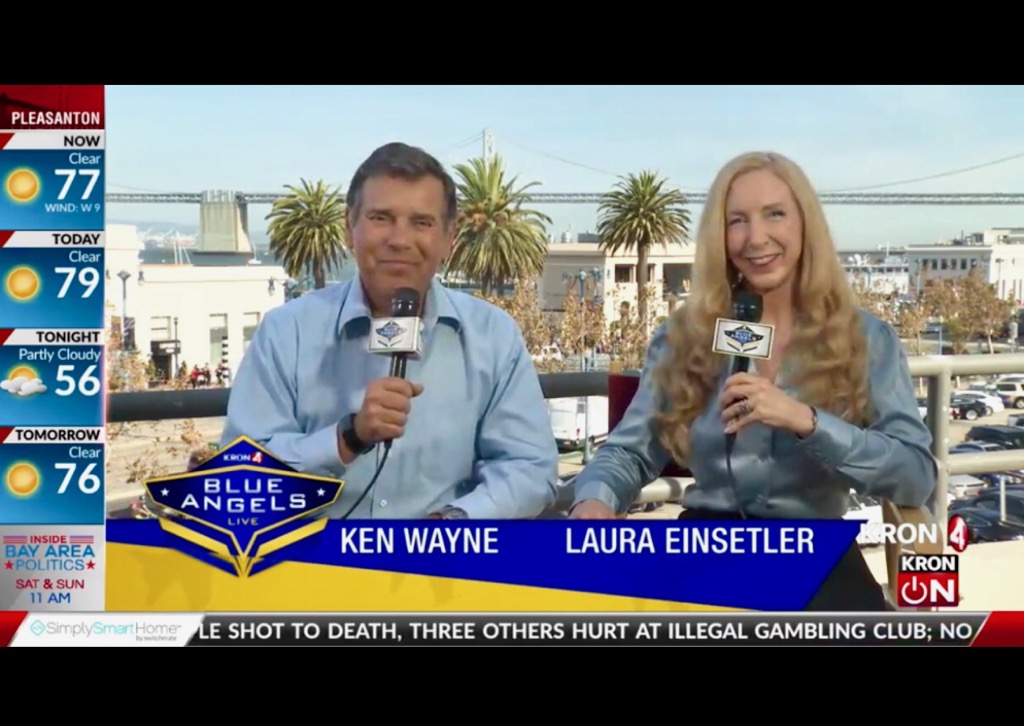 I had such an incredibly epic week that I wanted to share my excitement with you! I am so honored and grateful to have experienced all that I did. At one point, I thought I was going to explode in aviation joy and airshow fun! The full show is available for you here at the bottom of the page (Part One is the first hour and Part Two is the second) or you can see it on the KRON ON app if you sign up now!

It all started with a call from KRON 4 News Director Mark Burnette. We had worked together on a few pieces previously but he asked if I would consider co-hosting the Fleet Week special with Ken Wayne. I must have sounded a bit aloof but in actuality I was in total shock! I responded with “well, umm, yes??” I thought I must have imagined that conversation and went on about my business.

I received a followup phone call about a month later. He wanted to make sure that I was really “coming aboard”. At that point, I knew it was real and told him how absolutely thrilled I was to work the show with them!

As showtime raced closer, I wanted to gain as much knowledge and experience I could so that I could share as many details as possible with you all. Since United Airlines is the mega sponsor of the Fleet Week Airshow and the TV Special, I initiated proposals and ideas with them for more cool and added exposure. I also called up my friend Sean Tucker and explained my general plans and thoughts. He told me he was “all in”! In addition, I spoke with the Blue Angels Public Affairs Officer who would gift me with added info. My friend Scott Kartvedt who is the United Airshow coordinator, who was a previous Blue Angels pilot now flying on the Patriots Jet Team, was a super star liaison for all things air show.

I am not sure if you are aware, but in my past history I use to fly aerobatics and was the airshow director for Wanda Collins Airshows, Inc. We had a blast and worked our tails off for nearly 100 shows and appearances. We had wonderful sponsors and were working toward creating a female aerobatic mirror image team with the two of us. But, there was one particular show season that seemed to keep claiming the lives of several of our very experienced friends, performers, and mentors. It was devastating and we pulled the plug in lieu of having our children and airline careers. I do miss that type of flying and live vicariously through my other friends pulling all those G’s as they see the sky upside down!

The start to my week found me out in Denver lunching, briefing, observing, and flying with the United Test Pilot bosses Joe Heins, Kevin Thomas and Demo Team Pilots Joe Sobczak, Randy Abraham, John Mawhinney, and Ty Loutzenheiser. I was able to see all that goes into the safety and planning of these incredible performances. They all took turns flying first a high speed pass down to show center not less than 300ft and not more than 480MPH as they showed off the back of the aircraft in their sweeping strafe. Next came the dirty pass with gear and flaps down, as they slowly cruised show center. The third pass was down into the aerobatic box followed by a straight up high angle climb above the crowds. Last was a pass, but this time showing off the belly of the jet to the crowds. I was able to take some photos that we shared on the special as we watched in awe of that beautiful, massive 777 300ER! I am ready to book a ticket now and enjoy a ride! (See their promo video at bottom of the page!)

This was the day to get my own self ready! Packing, planning, resourcing, and prepping. Ready to launch!

Once I made it up to the Bay Area, I received an inquiry from Team Oracle asking for Thursday if I would want to go up flying with them in formation for a photo/video flight!! Seriously?? That was always a dream of mine and you are asking to make it come true for me?? Whoohoo!! I was sooo happy to see Sean and now meet Jessy in person! They were taking up Young Eagles recipient Nathan DelRosario for his aerobatic experience. I got to fly in the Seneca with the side off the airplane while taking this incredible footage you see in this piece! I had so much fun interviewing them as well and KRON 4 did an excellent job editing it all together, including Chris Mezzavilla’s amazing photos to share with you! (See my video footage and interview at the page bottom!)

I had brought my little sister, my niece and my daughter with me for the first two days so that we could celebrate my niece’s 15th birthday at the ‘Hamilton’ Play in downtown! My sister Jenny Zamora dressed the girls up and they looked so beautiful! The singing and dancing were like nothing I had ever seen and the Orpheum Theater gave the feeling of true history in the making! We had some serious family joy happening.

Next on the agenda was being able to do some mentoring for Girls, Inc.! I enjoyed meeting so many outstanding people in the United Corporate Chalet! There were several heads of United there that make so much of this weekend tradition an inspiring reality. I was able to hang out with other women pilots who were speaking to the girls about making aviation a possible career choice. I even met the Chix Fix Team of women maintenance pros who travel for competition as an aircraft repair team!

That evening, I was honored to have been invited to the United Test Pilot Party! It was so much fun seeing everyone again. There were many other people I got to meet such as the incredible Bob Wood who does all of the Fleet Week announcing for United.

Show day!! I could not wait to get to the KRON 4 Studios just north of the Bay Bridge at the Embarcadero! I was thrilled to see everyone again and we reviewed just a few items with each other. Cameras rolled and we were able to aviation geek out with you! We described and showed the awesomeness of the Fleet Week Airshow and performances!! If you could not join us then, please join us now! The full show is posted below!

(See what it is like from Scott’s cockpit view with the Patriots Jet Team at the bottom of the page!)

The line up was incredible! The Navy Leap Frog Sky Divers jumped out with their colorful shoots flying the American Flag for the show opener. United Airlines flew the Boeing 777 like a sky ballet in the both in the morning and the afternoon. There was a Coast Guard C-27 and MH-65 Demo. National Guard showed off the HH-60. Sean Tucker awed millions with his solo act in the Oracle Challenger 3. There was a C-17 demo, Greg Coyler Ace Maker T-33 performance (and thanks for the photo bomb Greg! lol), and my near and dear Navy P-3 and PA-8 demo! The Patriots Jet Team showed off their skills and colors, Mike Wiskus flew his Lucas Oil Pitts, and then the amazing F-35 jet pilot performed. After that, there was the heritage flight with the F-35 and (heart skips a beat) the P-51! To finish off, we were mesmerized by Sean Tucker and Jessy Panzer of Team Oracle doing the Sky Dance, the amazing test pilots of the United B777, and the elite Navy Blue Angels!

I celebrated with all of the performers at the performer party that evening! It was so exciting to be with so many others who dedicate so much of their lives to aviation. A certain person I must say I was a bit star struck by, Captain “Sully” Sullenberger was there also with his beautiful wife. I was so lucky to be able to speak with him for a little while. My wish had always been to thank him for all he continues to do in the field of aviation safety. I was so grateful to have been able to do that in person! Yes, I got shy when he said he had watched me on the TV special earlier that afternoon!

I got to be a spectator and watch the whole airshow by boat out on the Bay thanks to my long time friend Captain Rick Johnson! One of my close friends, Casey Curtice Souza joined us and although it was a bit choppy and cold, we had an incredible day experiencing the array and vastness of the show in its entirety!

Thank you for sharing this adventure with me!